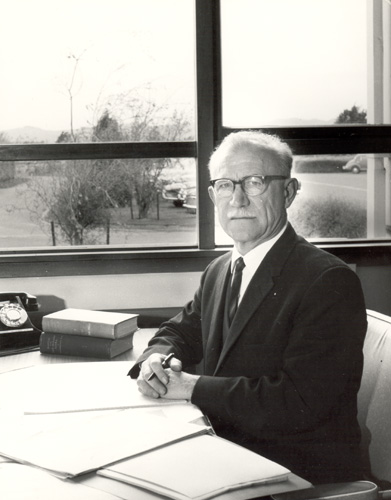 Victor Dmitrievich Zotov (Zotoff) was born in Vladivostok, Russia, on 16 September 1908. Little is known of his early life, but in 1924 he emigrated to New Zealand with his parents, Dmitry Nikitich Zotoff and his wife, Olga Ivanovna Mikulovskaya. The family settled in Bunnythorpe, Manawatu, where his father took up farming. From 1925 to 1927 Zotov attended Feilding Agricultural High School. His subsequent achievements as a botanist owed a great deal to the influence of two members of staff: the founding principal L. J. Wild, and the English master, H. H. Allan, who later had a career in botany.
While still at high school Zotov recorded the results of some botanical studies in the school bulletin. Then in 1927–28 he and G. V. Wild received a research grant of £10 from the New Zealand Institute to study sexuality in the plant genus Coprosma. The resulting scientific paper was published in the Transactions and Proceedings of the New Zealand Institute in 1930.
In August 1928 Zotov became the assistant to Allan, who had been appointed systematic botanist at the Plant Research Station in Palmerston North. When the station was reorganised as the Plant Research Bureau within the DSIR in 1936, he became part of the new Botany Section (later Division). On 9 February 1937 at Palmerston North he married Alice Elizabeth Taylor; they were to have two sons and a daughter. That year the section shifted to Wellington with only two professional officers, Allan and Zotov, on the staff. It moved to Christchurch in 1953 and finally to Lincoln in May 1960.
Vic Zotov’s research work centred around two areas of investigation: the vegetation of New Zealand high country, and the classification of grasses. In 1930 and 1935 he co-authored two papers on the latter with Allan, and in 1936 contributed some 30 drawings for Allan’s An introduction to the grasses of New Zealand. Then, on his own, he published a survey of tussock grasslands (1938) and an important paper on taxonomy (1943). His MSc thesis in 1945 was on the genus Danthonia. In 1955 Zotov spent seven months overseas examining botanical collections, especially of grasses, in Washington DC, the Royal Botanic Gardens at Kew, the British Museum (Natural History), and in Paris.
A keen tramper, Zotov had become a member of the Tararua and Manawatu tramping clubs, and began detailed observations of the Tararua Range vegetation from about 1930. His publication of a pioneering study on this subject in 1938, with four collaborators, indicated his increasing status as a plant ecologist. An interesting feature was the inclusion of detailed lists of moss and liverwort species, as well as the more usual flowering plants and ferns. A short paper published in the same year which focused on correlations between vegetation and climate was largely based on these observations, but extended his proposed ecological classification to the rest of New Zealand.
The destruction of indigenous plant life was another of Zotov’s interests. In his 1938 paper on South Island tussock grasslands he fiercely criticised high country agricultural practices. He argued that destroying native vegetation to form grasslands too often resulted in bare earth and heavy erosion. In a paper presented to the sixth Science Congress of the Royal Society of New Zealand in 1947 he dealt with the deterioration of forest in the Tararua Range (mainly due to deer and opossums), using evidence obtained from his own long-term, first-hand observations.
Besides doing regular field work, Zotov was a member of the New Zealand – American Fiordland Expedition in 1949, and in January 1961 he collected specimens on Campbell Island. He was active in a number of scientific bodies, notably, the New Zealand Association of Scientific Workers, the Wellington Botanical Society, and the New Zealand Ecological Society. His formal retirement in 1968 from the Botany Division was followed by a period on the temporary staff. Predeceased by his wife in 1976, Vic Zotov, one of New Zealand’s most eminent botanists, died suddenly in Christchurch on 26 May 1977, survived by his three children.